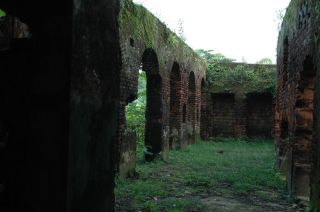 “People dear worshipped here, once upon a time; drinking the fine wine of fellowship,” Maftet spoke softly in the haunted old courtyard of once-vaunted temple. “Women, men and children; fathers, mothers, and sisters, brothers all; simple poor and those who stood tall in unity of community.” She ran fingers over one lingering wall, browned dark and dank, yet not cast down, but no longer part of crown achievement of city dead, now raising pity rather than praise.

“What happened here to make this place so drear,” I wondered allowed as an hundred questions flew thru my mind in like kind as I drew near my patroness-protector.

“The young and new wanted to cast out the old, but so soon as they’d begun the old grew bold; and the last song sung here was broken by tears,” Maftet answered. “The malefactors continued the fight against the old dogs’ bite, but most grew weary and it was then this magnificent place grew dreary. . . Death hung heavy in the air ~ the levy of schism ~ and evil laid bare the ill-intentions of darkened hearts. . . Unity fled and the community bled; then was no more.”

“Then do these stones not face the world now as a monument of disgrace?”

Maftet turned; fire burned in her eyes. “More than monument of disgrace, but an edifice of learning for any but fools; here are tools for teaching how reaching too far, too deeply, too soon can bring destruction at the noontime of any community.” She began to walk as she continued to talk. “Thy young say to the old, ‘Get out of the way,’ and the elders strive to hold them at bay, but then all devolves into dismay!”

“Tell me, please, who was right in your sight?”

“Ah!” She slipped her hand round my waist band. “Both were right, and both were wrong; both lacked sight, and both were weak, not strong. Enmity grew and lead to calamity that will ne’er be forgot in all eternity. . . And all over such trifling matters; all the clatter of fools with their endless prattle. Then came the clatter of sword and shield, for neither side would yield, and in yonder plain half were slain.”

And so it was that we were standing, hand in hand, not only in ancient ruins . . . but in the graveyard of what once was community ~ the hard reality pressing in on me that many such cemeteries exist as the living still persist in trifles and petty disputes. I was mute.