Oh how the Evil One can appear as an angel of light, indeed, and how so very attractive the promises made! In my mytho-poetic series, this was my second encounter with wickedly alluring Bast. And would I give myself up to her death? This piece is an altogether dark beginning of an unsettling episode in my mythic journey. If you have not before, please enjoy now. (Also, this represents a continuation of my exploration into poetic narrative; not to everyone’s taste, to be sure, but poets do experiment!) 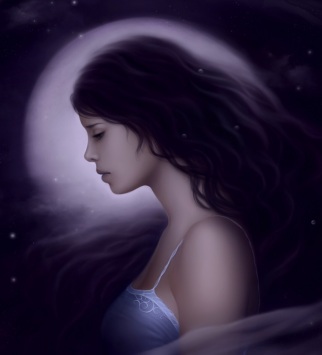 “It’s dark at night and dangerous without light,” she said, while holding candle by bejeweled, golden handle. “Vandals run as wild here as desert beasts… You are alone?” She was an altogether radiant maiden, fragrant with exotic oils and incense, and made no pretense of threat. “You should get up and come; you’re only some way from water and better rest in nest of greenery and flowers, neath protective bowers.”

Yes, of course I’ll follow. Why lie here so hollow in desert sand, waiting to be killed by wandering band? And so I struggled to my feet in complete determination to go where she led to be fed from clear, cool watering hole, though tottering on weak legs; nevertheless, in such state as this, whose soul would not beg to go on? So I approached her; she reproached me not, but smiled and beguiled my heart.

The candle? Now where? No where, but how? Still the flame with which she came … No, more expansive, impressive … even growing more massive. Wonder overtook me and shook me. Moving, flaming ball, practically brewing in her hand … changing colours ranging the artist’s palette. What mystic talent does this one possess? Her smile only widened but seemed all the more kindly, so I blindly tread forward toward this sprite of the night.

With every step the flame began to elongate more and more into some kind of straight slate. She could see my confusion, but remained sedate, content to await my arrival. But for what? To help or end my survival? All began to take more shape and I could not escape noticing that fire now burned underneath what looked like funeral pyre… Funeral pyre! I suddenly looked straight into the wickedly beautiful eyes of Bast, who’d cast her spell once again without warning bell.

“No wait! I throw out no bait,” she said in near desperation, as in exasperation I’d started to turn away. “Come no closer, then, but stay where you are; stand away thus far, but hear what I have to say… Stay.” I looked at her again — foolish sin — and she appeared differently, intently gently. Innocent yet magnificent. Calm. Herself numinous balm for all my wounds, hurts and pains and strains. “Don’t go away. Stay.” And so I did.

She looked sad, but under glow of bright light of the moon, not at all bad. Neither was she mad, but upon my stopping and turning back toward her, just a bit glad … mournfully so, but not scornfully as she had been when we’d met before and she’d set about to emasculate me! Had she changed? Perhaps she has a story, too, so why should I worry to hear her tale? Can I not bear as much, or shall I so utterly fail as a man?

“I was thrown out by my mother; blown out by God to live forever upon sod of earth,” Bast began as if in answer to my thought … but what had I just bought? “I am wicked, twisted, afflicted, and unacquitted. Restricted here … convicted of crimes I never committed, I admit I’ve become addicted… Oh! But hear me, dear one! Let some other sun shine in your heart! Give me mercy’s part, and let our relationship begin again without stain of past nor strain of lies!”

I began stepping forward toward her again. But what of funeral pyre? Is she still the same liar? Will she set me to the fire? Desert wind blew threw and somehow I knew … but I came well within reach of arm and potential harm, yet strangely with no alarm. She changed, I could clearly see; wrapped herself around me, bound me. I made not a sound. Nothing of this seemed to confound. “You have only to pass through the fire as if in a chasse.”

But pyres are for funeral fires, I thought to myself, though I’d already brought doom upon myself. I didn’t care; to escape the

gloom of this world was enough for me to assume any change would be fresh breath, even death. How to pass through, though, when lying down and dying is what’s called for here? Bast laughed, but not half as cruelly as she could, and coolly explained, “I was speaking metaphorically, but not horribly, my love; certainly not with austerity or in vulgarity.”

Cold. Cold in her hold. Breath. Her breath smelled of death.

“Only lie down and drown yourself in the flames, and do not blame yourself for so doing… You’re going to be mine.”

5 thoughts on “Dark At Night; Dangerous Without Light”